I first got the idea to collect field rocks for painting on them a few months after the pandemic appeared in my province. Each one in my collection of Hand Painted Stones was collected while on my daily walks, either on my own farm or some of my relative’s land, all of which are located in Alberta. When my husband first heard about my idea of painting on rocks, he asked if I, as a little girl, had ever imagined painting on field stones while picking rocks with my dad and at least four or five of my siblings. Picking rocks was one of my least favorite jobs, especially on real hot days when we could see our friends and neighbors’ cars passing by on their way to the lake. During those years, I had often promised myself that I would never, ever pick rocks as an adult so it does make me laugh to think I’m back picking some five decades later. But this time around, I actually enjoy the serenity surrounding me when I’m in a field. The fact that I can go pick rocks for my artwork whenever and for however long I want, without anyone telling me what to do or how to do it, is especially appealing.

It wasn’t until I had completed a few that I realized how painting on rocks was really helping me to stay grounded and feeling much calmer. I’ve been highly sensitive to people’s energy since I’m a little girl and had not realized how much other people’s anxiety and fears about this new virus was affecting me negatively. I was often feeling a heavy energy when around some people and would easily get emotional without knowing what was making me so sad. It was my daughter Dana, a sensitive like me, who reminded of the negative psychological effects of my sensitivity when I don’t pay attention to what’s happening around me. Over the years, I had learned about metaphorically surrounding my being with a protective bubble as a way to stop absorbing other people’s negative energy but I had forgotten about it.

About a month into painting rocks, I realized that while I hold on to each one to paint it, I’m actually holding on to all the memories that rock has held for centuries or since the beginning of time. When I truly connect with that truth, even just for a micro moment, I’m overwhelmed by the gift the universe offers each one of us through rocks and that is when I feel the most at peace and one with nature. It is therefore my wish that each one of my painted stones conveys to the people who see them the ‘rock solid joy’ they provided me while painting them.

*** The painting on each one of my Hand Painted Alberta Stone is unique and will never be duplicated. Each stone I paint is signed by me, numbered and comes with a Certificate of Authenticity. The number written on a stone by my signature represents the order in which it was painted, in other words, #1 is the first stone I ever painted and #10 is the tenth one I painted and so on.

I’m including the pictures below to show how my one-of-a-kind Hand Painted Alberta Stones, displayed by themselves
or as part of a grouping,  make an excellent conversation piece in any room where you and your guests meet. 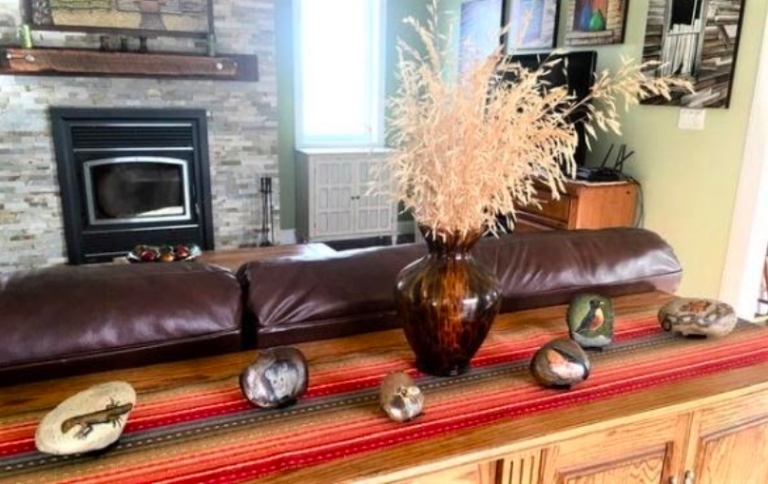 Impact of The Message Art

More about how the Message Art impacted my being and my life:


One of the most life-altering insight I became aware of through the Message Art is that:

– and our beliefs determine the outcome of all our experiences.

The Message Art’s enlightening and often thought-provoking divine messages may have introduced me to a fear and guilt FREE concept of God but applying these messages to my everyday life is what transformed my fear-based perception and belief. This transformation though, could only transpire once I became fully aware, and then accepted, that fear and guilt were actually the opposite of love, which in the context of the Message Art, is God AND that love, therefore God, never judges or punishes, nor has expectations or conditions, and above all else, love never ever takes away a person’s choices.

By transforming my perception to one that is unconditionally loving while honouring my freedom to choose, the Message Art not only dramatically changed my belief AND experience of God, it went on to positively change the way I perceived myself, my addiction, the people in my life and the world as I knew it. This life-altering event was initiated by a concept introduced by the Message Art Painting titled ONENESS, which is:

the reason our perception of God greatly influences the way we perceive, and then experience, everyone and everything on our planet, including our own being, is because all that exists derives from God’s energy.

It took me fourteen years to fully realize that the purpose for the unprecedented Message Art collection was to help me unravel this concept one divine message at a time. It was during this unravelling that my addiction and depression ended for good, as well as my self-deprecating and unworthy beliefs. It is also when I experienced, for the first time, a deep and profound inner peace and discovered the huge difference between believing in God, and experiencing God.

ABOUT THE MESSAGE ART STUDY and what it entails:

Once you Register for the Message Art Study, you receive access to one Module per week (one per Message Art painting) for the duration of fifteen weeks. You have one week to complete each module which comprises of six easy to follow steps:

STEP ONE – a video which begins with a foreword from Gisele, followed by the illustration of one Message Art painting’s unique elements and their divine messages. While watching these videos, chances are you will feel drawn into the painting being illustrated and become one with it much like Gisele experienced while receiving its messages – truly an unforgettable experience.

STEP TWO – Reflective Questions and/or Exercises to help you better assimilate and then apply the messages of that specific painting more effectively. You may choose at this time to replay the video in Step One as you ponder each question, or you can read over its transcripts which are included (and printable).

STEP THREE – A video of Gisele’s personal reflections on the painting’s messages in hopes they may trigger your own life’s experiences or memories which correlate to these messages.

STEP FOUR – Return to the reflective questions/exercises to reflect on them once more.  Chances are you will be able to further expand on your answers or notes at this time.

STEP FIVE – As you spend a couple days pondering the messages conveyed in the module, notice which one stands out the most for you. Once you know which one, find a blank piece of paper or canvas, light up a candle and invite both your 8-year-old self and your divine guidance to come help you create a painting which best represents that message(s). Do not question nor doubt your creative ability while working on your painting. Once you’re done your artwork, thank your helpers and then write down a few notes to explain the correlation between your painting and the particular message that stood out the most for you.

STEP SIX – The day before the next module is made available to you, which is one week after you received the previous one, you and the other participants meet online for one hour with Gisele in her private Zoom Room. The purpose for this meeting is to review the messages conveyed in that week’s module by each participant sharing their artwork and going over their notes about it. These weekly meetings quickly become the participants’ most anticipated part of the Message Art Study.

TO REGISTER FOR THE MESSAGE ART STUDY, CLICK HERE